With the house design agreed we prepared the detailed planning application. Border Oak offer both design and planning service.

It would be a lie to say that the planning process in Herefordshire is easy - it really isn't. This site was admittedly more complex than most because the site is not within the settlement boundary and the main village is largely covered by flood plain.

However we studied the Neighbourhood Development Plan for the village, and were confident that we could meet all of the policies, aspirations and criteria within this local planning document. We also did a lot of research to show that the site had never flooded and would be highly unlikely to ever flood.

Most planning applications are to be determined within 8 weeks - but this deadline came and went. There were no objections from either the public or consultees and yet the officer would not determine the application. We knew it was policy compliant with the Neighbourhood Development Plan, the National Planning Policy Framework and the local Core Strategy. We also knew Herefordshire had missed its housing delivery targets for several years and couldn't demonstrate that it had enough housing land. Technically this meant that planning should be granted without delay unless the impact of doing so would significantly or demonstrably outweigh the benefit.

The planning officer finally responded to say, without any negotiation,  that he was going to refuse the application. His specific concerns were:

Whilst we were shocked by the potential refusal, we were also puzzled by his concerns which seemed to a personal opinion rather than policy driven.

We were able to quickly arrange a defense to each point and provide supporting information to counter his concerns. We commissioned a further traffic survey that showed vehicle movements were low and slow on the C road and that visibility was excellent.

We argued that on a C road with so few cars and wide grass verges it was still possible for occupants to access village facilities by foot and bike. The heritage orchard was actually being preserved and restored under our proposal and not a single tree was lost by our plans - with new heritage trees actually being planted. Trees were an integral element of the landscape design and were enhanced by a wild flower meadow, new native hedges, biodiversity areas and tree preservation commitments.

The village neighbourhood development plan specifically required that any development proposal must be located in the area that was closest to the formal settlement boundary but without flood risk. This plot was exactly what the NDP wanted, so we reiterated the NDP policy to the officer - who declared that the NDP was wrong and 'rubbish'. And with regard to the officers preference for more homes on the site, we gently pointed out that the economic benefit of one house was still significant and that surely it would be inappropriate to build an estate of houses on a plot that they were concerned might be ecologically sensitive or was dangerous to access.

As we chipped away at the officers points of contention and Highways removed their concern it meant approval could be granted  - reluctantly and probably only because we have intervened before the refusal was sent in the post.

Planning approval was eventually granted with more than 20 conditions a year later than it should have been. 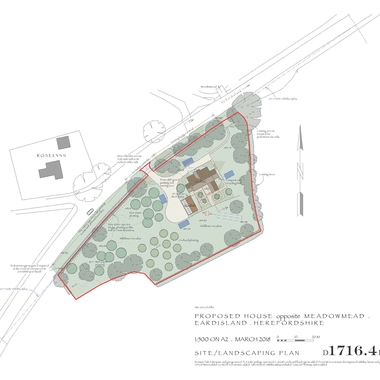 Sign up to our occasional newsletter featuring stories from our Herefordshire workshop - from new case studies, plot postings to handy custom and self build tips.