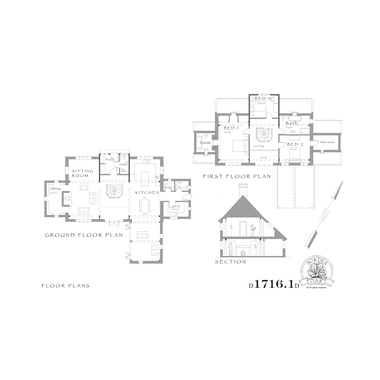 John and Patsy always knew that they would create a design inspired by the true principles of the Arts and Crafts period - they considered other design options, including a super modern barn, but in the end both felt the plot was best suited to something classical.

John is an architect and has been responsible (alongside Darren Ray and before Darren, his uncle Lawrence Ray) for the renowned Border Oak portfolio of designs for four decades. So with every option and avenue available it was actually very hard to commit to a final design narrative - but he was also critically aware that some 'trends' and fashions are temporary and that houses should transcend time, especially oak framed houses which last centuries. In the end he followed his initial instinct and utilised his personal and professional passion for the principles of a 19th Century design movement to celebrate and showcase vernacular craftsmanship.

John and Patsy felt very strongly that they should echo the fundamental principles of the Arts & Crafts Movement as authentically as possible, whilst creating a 21st Century home. They were not wanting to build a pastiche or a slavish copy of a specific Arts and Crafts building, but to design a home that could sponsor and support the many talented artisans that work in the local area.

The Arts and Crafts Movement - perhaps most famously associated with William Morris and Ruskin - was a philosophical concept of the 19th Century that looked to celebrate craftsmanship and restore a human influence upon all things that were made and designed. It was envisaged an an antidote to the rising industrial revolution that enabled mass production, often by machine, but led to a monotous deskilling of the general factory based workforce and the loss of skills.

The movement was hugely influential in the UK, Europe and America - and covered a wide range of craft disciplines from fabric, furniture and ceramics, jewellery, literature and metal work. Preeminent designers continuously sought a balance between function and aesthetics - seeking everything that was designed and made to be both 'beautiful and useful'.

In architecture the Arts and Crafts portfolio was noted for an unwavering search for 'simplicity' alongside the revival of lost skills and application of traditional workmanship - famous Arts and Crafts architects such as Voysey and Webb strove for clarity, beauty and form - emphasising the importance of natural materials and vernacular detailing, alongside proportion and function. Fuss and decoration were used sparingly, which often provided the perfect back drop for the more ornate Arts and Crafts interior items.

Many of the most successful original  Arts and Crafts buildings can be identified by their shared characteristics of:

John has been an admirer of Arts and Crafts architecture since his university days - and was heavily influenced by the principles of the movement when he set up Border Oak and revived the lost art of oak framing.  The Arts and Crafts inspiration can be felt throughout the Border Oak portfolio - even our contemporary designs are underpinned by craftsmanship, proportion, scale, vernacular materials, detail, simplicity and form.

Redgate House was the perfect opportunity to take this one step further and create an authentic interpretation of many of the prinicples above - to create a home that was a true legacy celebration of the incredible makers and craftspeople we have spent decades forging relationships with.