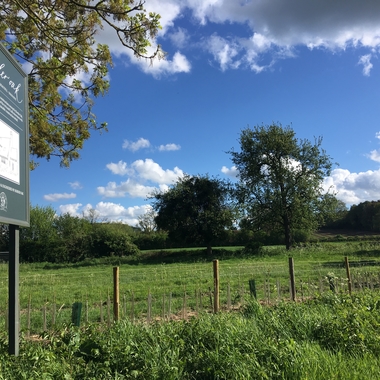 As you may already know - finding a plot can be tricky!

Ironically John and Patsy weren't really looking for a plot.

Their own home, the very first Border Oak house, is a beautiful property with an established garden (also in an orchard), with a meadow and a two bedroom annex - completely hidden away yet in the centre of one of Herefordshire prettiest villages. What more could they want?

But, as they got a little bit older they realised that the size of their home and garden was becoming more of a burden, and that it might be time to build again. As luck would have it their daughter specialises in securing planning approvals in Herefordshire and had been given approval for two sites on the edge of Eardisland using specific policies within the village Neighbourhood Development Plan and the National Planning Policy Framework, including her own home - Meadowmead - which you can read about on our case study page.

The owner of the orchard at the end of Merry and Ben's drive asked if Border Oak were able to help them secure planning for a house now that others had been passed and Merry felt confident that she could put a good case together.

Designs were pulled together along with ecological surveys, level surveys, tree surveys, Flood Risk Assessments, planning statements, landscape impact assessments and a traffic speed report. A high level biodiversity enhancement proposal was submitted alongside a bespoke house design with strong sustainability credentials. Border Oak spoke to the Parish Council before submitting the application and also liased with the neighbours.

Despite the application being policy compliant at every level and exceeding expectations, planning was not easy - it took over 12 months rather than the 8 weeks it should have.  It was saved from the brink of refusal by a desperate phone call to the head of planning when information came to light that the officer had not taken the traffic survey into account and had not communicated the outcome fully. In the end 12 months of wrangling came down to wether John and Patsy would be able to walk along the village road (unclassified) for 30 metres  in order to reach the main pavement. Traffic speed data showed that it was safe but also the cluster of existing nearby houses were already taking the same journey  - so the Highways officer was content even if the planning officer wanted to refuse.

In many ways Eardisland is lucky to have any pavements and to have a wide range of services - the pavements lead directly to the shop, bus stop, post box, two pubs, tea room, village hall and church and so on balance it was felt that the plot was sustainably located and daily car journeys could be avoided.

John and Patsy's application had no objections and almost all the agencies and consultees were in full support. The county ecologist was not keen as he wanted the 'orchard' status  to remain - however only periphery trees remained and John and Patsy were keen to keep this and protect them. They will also plant a traditional orchard in the meadow to the side of the plot. The remaining apple trees would have been removed if they were used as a barrier to development, so supporting this application was the best way to protect and enhance what was there.

Planning was reluctantly granted - with 25 conditions!! It had been a lengthy and needless struggle, but is a good example of tenacity and resoluteness. It also demonstrates the importance of working with someone who knows the policies in the area inside out and the need for surveys and reports to support what you do.

It helps that the house design and landscaping plans were pretty good too!